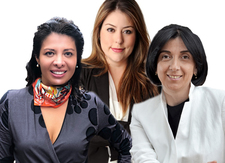 The future of the workplace is about adapting to increasing dependency on mobile devices and IT technologies, being open to innovations and new perspectives. The workplace in 2050 to me is the one that can take advantage of new trends and requirements, provides responsive working “smart” environment and is employee-centric. It allows more work from home thus downsizing office space and providing flexibility in delivering results.

To achieve gender equality, women need to be educated worldwide, proper value should be given to women’s work, they should be empowered to receive recognition and compensation. More women need to get into power as well as get involved into non-traditional vocations. Women should be provided with skills for the future of work and gender norms need to be transformed.

The advice I received from a friend of mine, Gvantsa Meladze, who was a 2nd intake of Grenoble Ecole de Management was the most useful in my career. My MBA has backed up the practice by theory, which I lacked. The education I received in Georgia after the breakup of the Soviet period was well behind the contemporary methods of teaching and learning and was not of good quality. Therefore, studying at Grenoble Ecole de Management has widened my horizon and deepened the knowledge I had, as well as providing new insights into the topics I was interested in.

The second advice also received from a friend and colleague of mine was related to creating a Georgian Farmers’ Association. I’ve been supporting the farmers throughout Georgia by delivering the services they require and, most importantly, lobbying for their rights. I thus managed to change for the better the lives of the member farmers, which I believe is crucial both for them and for the country’s development in general. The energy and enthusiasm I’ve been putting into this work is immense and has been beneficial for both the farmers and myself it has helped me to grow both personally and professionally and provided more incentives to do more.

The workplace would probably be home, we are already seeing a shift in mentality there. The share of remote workers should be larger and thus the entire workplace idea is being redesigned. We may need to connect with colleagues face to face for very specific situations and types of jobs. Lawyers may always need to go to court, but now even doctors are able to work remotely with the aid of technology.

Gender equality has always been a puzzle to me. I think that if we do what we are supposed to our gender should just be a part of our traits, like height, eye color; it should not pose a bias at work. Thus, when we discuss gender equality it goes further than that because we touch on matters of race, culture, look. There is no place for a line of thought where a
certain trait such as gender should define success. Female, male, transgender, undefined now there are many more variations to that definition, and we should not let it determine how we act. Mentoring the young who dream and work towards success should be the turning point for a more inclusive society.

I have worked in banking and technology, both are male dominated environments where I live. A friend once asked me why I liked to be in such positions and how I managed to thrive regardless. And the truth is I never thought of it that way, I knew there were more males than females in leadership positions, however I have always focused on my performance, strategy and where I want my actions to get me.
While I worked in a Bank my boss, also a female, told me that no one ever regretted being brave. We always talked out the issues and road blockers, but being relentless in what I wanted to achieve, combined with active listening plus not being afraid to speak up always helped.

I imagine a place where I can provide a lot of jobs to multi-skilled people, where they can feel happy, complete and that can provide a good quality of life.

I think that in order to achieve gender equality, it is very important first, to acknowledge that all the people living in the world are different and unique, each one of us has characteristics that make us unique. We all have different personality, gender, religion, race, manners, thoughts and dreams, but the common denominator is that all of us are PEOPLE sharing a world… Therefore all of us we should be treated the same, and have the same rights, respecting about each one’s uniqueness.

Be loyal and sincere. Always think about doing good, respecting others, and don’t do what you would not like to be done to you.